By Blaze BullockJanuary 25, 2022No Comments 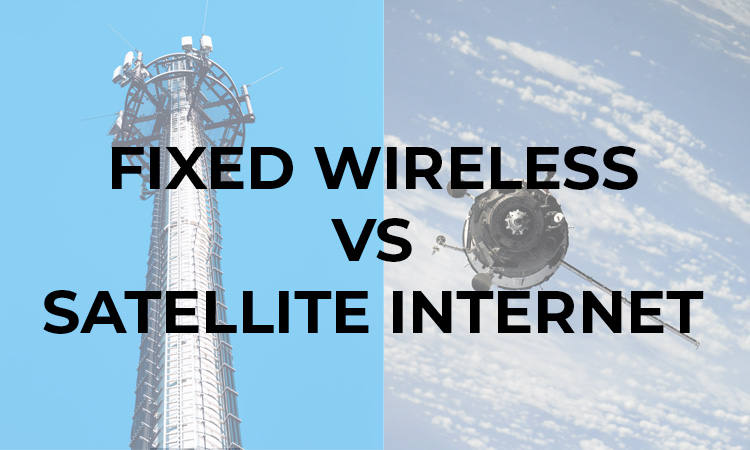 When deciding about internet connectivity for your business, you may be faced with a common question: fixed wireless vs satellite? This question often arises because both are popular wireless options.

In this article, we will discuss these two popular options for wireless internet delivery as well as their benefits and drawbacks. If you need fixed wireless or satellite internet, we can do that for you. We’ll even give you a free quote.

What is Fixed Wireless Internet?

What Do I Need to Know About Fixed Wireless Equipment?

A typical fixed wireless deployment consists of wireless customer premises equipment (CPE) that is installed at the customer site. The CPE includes a broadband radio with an integrated or external antenna and a cable that connects the radio to the customer router/firewall. The CPE is usually mounted outdoors.

What are the Pros of Fixed Wireless Internet?

There are several advantages you gain from the use of fixed wireless internet for your business. These include:

Depending on your requirements, you can get up to 1000 Mbps Internet speeds with fixed wireless.

One of the biggest benefits of fixed wireless is that is can be deployed in very little time – usually inside a few hours. By contrast, wired options such as cable, fiber, and DSL take much more time to deploy.

Another big benefit of fixed wireless is that it can be deployed in hard-to-reach areas. Wired infrastructure such as cable and fiber needs rights-of-ways (trenches that are dug under roads) and cable ducts inside buildings inside which the physical wire is installed. For fixed wireless, you just need a place on the building’s rooftop that has Line of Sight with the service provider base station. With that in place, you are good to go.

Rugged commercial radios are very reliable with mean times between failures (MTBF) of 25 to 30 years. You can also use systems with redundant radio units that switch over to the backup radio in less than a second in case the working radio fails.

Fixed wireless offers symmetric bandwidth (upload = download), which is one of the main requirements for upload-intensive traffic such as video.

Fixed wireless offers very low latency, usually 1 to 2 milliseconds. This feature is critical for real-time traffic such as voice and video and applications such as gaming.

When you get a fixed wireless link, the internet bandwidth is dedicated for you and is not shared with other users. Therefore, you always get good performance. In contrast, internet bandwidth over cable and other types of technologies is usually shared between multiple users.

Are There Any Cons to Fixed Wireless Internet?

As with all technology options, there are advantages and disadvantages to choosing fixed wireless internet for your internet connectivity. Among the cons for this type of connection are:

Line of Sight or LOS is required for reliable wireless links. LOS is only available when physical obstructions such as buildings and trees don’t obstruct the wireless signal.

If LOS is not available, then a tower may be required on the building rooftop to increase the height of the radio. Towers can be costly and take time to install. You may also need to apply for a permit before you can install one. Towers also affect the aesthetics of the building and the neighborhood.

Fixed wireless, like most other wireless services, can be affected by very high rainfall or heavy snow.

Fixed wireless services are more expensive compared to other options such as cable and DSL. In addition to the monthly service fee, you may also have to pay the upfront cost of the wireless equipment.

What is Satellite Internet?

What Do I Need to Know About Satellite Equipment?

Here are the pros you gain from satellite providing your internet connection.

One of the major benefits of satellite links is that depending on the frequency band a single satellite can cover a whole country or even a continent. This means that you can get satellite coverage anywhere in the world. The only exception may be the North and South Poles. This is only because satellites have not been deployed to provide commercial services for those regions.

Satellite links with large antennas may take a few days to install. This is because of the cemented foundations and other civil works that are required to support large antennae. Smaller antennae, like those used for most satellite Internet links, can be installed in less than a day.

Are There Any Cons to the Use of Satellite for Internet Connectivity?

The cons associated with satellite for internet connections are as follows:

Satellite links have much higher latency compared to other types of communication. This is because of the large distance from your site to the satellite (~36,000 km for GEO) then from the satellite to the service provider site. The typical round-trip latency for a GEO link is around 540 milliseconds. Round-trip latency for LEO-based link such as Starlink will be less than 100 milliseconds.

Satellite internet provides asymmetric bandwidth which is not suitable for upload-heavy applications such as video.

Satellite internet is more expensive when compared to cable and fiber. In addition to the monthly service fee, you may also have to pay the upfront cost of the satellite equipment.

Satellite links can be affected by rain and even heavy cloud cover.

If you are in the desert or on a remote island in the Pacific, then the only option for you is satellite internet. However, if you are in a metropolitan area, then fixed wireless offers many benefits that satellite internet cannot match. This is especially true for business users since business users require reliable services backed by service level agreements (SLAs) and customer support.

Service providers only offer SLAs when they know that they will be able to meet the contract terms. This is another way of saying that SLAs are only offered for services that are intrinsically reliable.

If you want high-speed internet, dedicated and symmetric bandwidth, and low latency, then fixed wireless internet is definitely the better option.

Abadi Group is a leading telecom agency with over 25 years of industry experience and access to over 150 voice and data service providers. We are totally independent and unaffiliated with any carrier, allowing us to offer you the best services at the best rates.

Reach out to us today at service@abadigroup.com or call 888-544-1231 for a no-obligation consultation. You can also click here to get your free quote. We’re partnered with the biggest and best business internet providers in the country including Nextiva, AT&T, Comcast, and more! We serve the entire state of New Jersey and New York as well!