What is Non-Fixed VoIP?

By Blaze BullockDecember 16, 2021No Comments 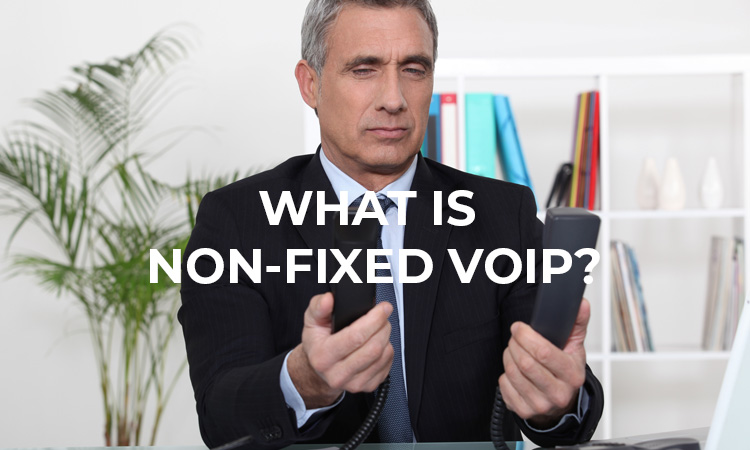 Voice over Internet Protocol (VoIP) is used for making voice and video calls all over the world. One of the features offered by VoIP service providers is non-fixed VoIP. Non-fixed VoIP is basically a virtual phone number that is not attached to a physical building or address.

Since its inception, the technology for human-to-human communication has evolved on a truly grand scale. The first telecom networks were analog in nature and used circuit switching. This switching was done manually. In time, automated switching replaced manual switching, and the wheels were set in motion for what would become modern digital technology. This was then followed by a plethora of value-added services such as caller ID, data services, and much more.

Data networks for machine-to-machine communication started to emerge in the early to late 1980s. These networks continued to grow until the entire world was connected via the global Internet in the mid-1990s.

Nowadays, most voice and data transmissions are carried over data networks. Data networks differ from traditional/legacy voice networks in the following ways:

Today, we can make voice and even video calls from all types of network-connected devices such as laptops, smartphones, tablets, and even smartwatches.

Some of the VoIP protocols are:

What are the Advantages of VoIP?

With VoIP, you can make calls:

Compared to traditional telecommunication systems, making calls over VoIP is not only cheaper, it also offers multiple benefits such as:

Because of all of these advantages, VoIP has been adopted by enterprises all over the world.

What is Fixed VoIP?

Fixed VoIP refers to phone numbers that are linked to a physical address. This address can be residential or commercial. Through a service known as number porting, you can keep the same number even if you decide to switch service providers.

The advantages of fixed VoIP numbers include:

What is Non-Fixed VoIP?

What are the Best Non-Fixed VoIP Features?

The features offered include, but are not limited to, the following:

What are the Advantages of Non-Fixed VoIP?

Non-fixed VoIP offers many benefits for your business such as:

What are the Disadvantages of Non-Fixed VoIP?

There are some very real and some perceived disadvantages associated with using non-fixed VoIP. These include:

What are Some of the Applications for Non-Fixed VoIP?

By using the top VoIP providers, such as Nextiva, we’re able to give you all the best features. Some of the most popular applications are:

Many communication apps such as Skype, Facebook Messenger, and WhatsApp use non-fixed VoIP.

How Do I Identify a Non-Fixed VoIP Number?

While it may not be possible to identify a non-fixed VoIP number just by looking at it, it is not impossible to trace these numbers. They are, however, very difficult to trace.

The first step towards tracing any VoIP number is to request information from the number provider to confirm whether the number is a fixed or non-fixed VoIP number. Other than that you can:

What are the Best Practices?

Here are some of the best practices for businesses that use non-fixed VoIP:

What are Some of the Non-Fixed VoIP FAQs?

Any VoIP number – whether it belongs to the fixed or non-fixed category – can make and receive phone calls.

Even though it’s not easy, it can be done. However, the virtual nature of non-fixed VoIP means that there is no guarantee that you will be successful in your tracking efforts!

Like any other technology that is widely available, non-fixed VoIP is also used for both legitimate and illegitimate activities. There is also no denying the fact that non-fixed VoIP has developed a bad reputation. But this is mostly due to a lack of understanding of the technology on the part of those who propagate this false perception. It is just as easy to use fixed VoIP for fraudulent activities! The best way of using this helpful technology is to follow industry best practices and educate yourself and your team about existing and new cyber threats and implement up-to-date measures for protecting yourself from these cyber threats.

VoIP is the technology that enables modern communication tools and apps that we use on a daily basis. It’s an inexpensive and reliable alternative to the legacy voice networks of yesteryear. It also offers benefits that make it attractive for businesses looking to quickly set up working systems that can be scaled rapidly as per business requirements.

Non-fixed VoIP is the ideal solution if you are looking to expand your business but don’t want to incur the high cost of setting up offices and hiring multiple global teams.

Numerous service providers offer plans that are tailored for startups, small to mid-sized businesses, and large corporations. Each of these plans can be set up in no time and is easily scalable, allowing you to grow your services along with your company. We work with all of the best VoIP providers including Nextiva. Click here to get a free quote on your VoIP service needs.